Click on book covers to purchase via Amazon. Don't forget to show Dawn your support by giving her a review! It's the best compliment an author can receive. 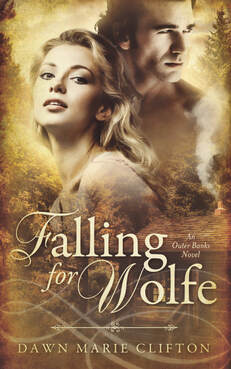 Friendship. Deception. Passion. Obsession. Love.
What else can one summer hold?
Julia Wescott, a head-strong and independent widow, is happily married to her work as a healer throughout the Outer Banks of North Carolina. Despite the occasional drama entailed with helping vacationers and locals, Julia is able to maintain a life of peace and balance.That is, until a handsome stranger with alluring eyes and a seductive smile makes an uninvited visit to Julia’s secluded cabin. She should have listened to her instincts and stayed clear of Edwin Wolfe, but when her two best friends dare Julia to find answers regarding this man with a questionable past, she has little choice but to play along with his flirtatious advances. To Julia's dismay, the game between her and Edwin is more exciting than she could have ever imagined, and somewhere along the way she risks breaking her own rule; never fall in love. Should she settle back into her comfortable life of predictability?In the midst of Julia’s dilemma, something unimaginable happens, leaving her without the freedom to choose. Julia's life transforms into a battle of wit and survival. Will Julia's faith be enough to keep her hope alive?

Book 1 of the SECRETS trilogy.
Keeping a secret is like having an active volcano inside.
It's only a matter of time...
Every summer Carson settles into the island routine at his grandparents' lighthouse, but this summer is different. Lured by a rumor that the lighthouse is haunted, Carson begins an investigation with his friend Levi and cousin Emma. Soon, they encounter the ghost. Hand-picked by the ghost to guard a diary from the 1800s, the trio begins investigating the old entries. Along the way, every uncovered secret produces more questions. But they aren't the only ones on a quest for answers. After the final diary entry is stolen, they learn it contains the answer to why the ghost has been haunting them. What if it's too late? What will the trio risk to reclaim the secret to their destiny?

Book 2 of the SECRETS trilogy.
​What happens when an entire life is buried in secrets? In this sequel to Secrets of a Ghost’s Diary, Only time will tell…
Contents of a unique treasure launch Carson, Emma, and Levi centuries into the future and into their second summer mystery. After meeting a boy named Stein, unexpected events happen, revealing a disturbing truth: their visit to Charleston was not by chance. As secrets surface, a dangerous rescue mission evolves, which sends the kids back to the late 1800s. It seems the ghost who transformed “just another summer break” into a time-travel adventure, may have also altered their destiny. What if Carson, Emma, and Levi never make it home? What if they get lost in time?

Book 3 of the SECRETS trilogy.
Some secrets build walls of isolation that are broken only when spoken…
When Carson agreed to take on the trio’s third summer mystery, he had no idea what dangerous adventures it would bring. Withholding the time and place from his friend, Levi and cousin, Emma was wrong, but Carson did not want to risk their refusal. In his mind, the decision to time travel to a place not found on Earth’s atlas, was the right thing to do. Upon the trio’s arrival, they meet a thirteen year- old girl named Alina, who calls herself the guardian of Labora. Their investigation becomes a rescue mission against time, against century old evils, and against horrors living within a treacherous world where inhabitants consider the Trio intruders. Their quest to save Labora presents them with only two outcomes… do or die.